Coffee, the seed of the coffee-tree and also a well-known drink made from the same. The coffee-tree is a native of Abyssinia, Arabia and many parts of Africa. It is extensively grown in Brazil and other northern states of the South American continent, as also in Mexico, Central America, Haiti, San Domingo and the East Indies. In a wild state it is a slender tree from 15 to 25 feet in height. When grown in plantations, it is not allowed to become more than six to ten feet high, with many branches. The fruit is dark scarlet when ripe, with two cells, having one seed each. The leaves are evergreen, and the flowers white. The coffee-tree thrives best in warm, moist lands; though it grows at Quito, Peru, at an altitude of 1,000 feet, where there never is any frost. The tree yields its first crop in the third year; from a full-grown tree, its yield may amount to a pound of coffee-beans. Three gatherings are made in the year, when this process takes place: The beans are placed on a mat to dry by the skin are taken off by rollers; and the coffee is cleaned by winnowing. The main difference in price and quality of the product is due to care bestowed in preparing it in different places. The chief kinds are Mocha, a small, grayish-green bean; Java, a large, yellow bean; Jamaica, smaller and greenish; Rio, pale-yellow and whitish. Rio and Maracaibo are the cheaper, and Java, Mocha and Sunda are the more expensive brands. Coffee allays hunger , exhilarates and refreshes. According to some authorities it also lessens the amount of wear and tear of tissue in the waste in the animal frame which is going on every moment. The consumption of coffee in the United States in 1910 was 873,983,689 pounds, an average of 9.33 pounds per capita, and the average import-price per pound was 7.9 cents. More than half the world's coffee is produced in Brazil.

"The new student's reference work for teachers, students and families",p.419-420.

Costa Rica (meaning rich coast), a republic of Central America, reaching from the Atlantic to the Pacific, with Nicaragua on the north and Panama on the south. It has an area of 18,400 square miles. Aside from the few Indians, the people are sprung from the Spanish settlers. The country is rich in gold, silver and copper, but its chief trade is in coffee, bananas and bar-gold, and it has been called the Coffee Republic. Costa Rica was discovered by Columbus, and a settlement was founded, probably in 1502, on his fourth voyage. It became free from Spain in 1821, and has had several constitutions, with a president and congress chosen every four years. It is held to be the best governed republic in Central America, though it is in default in meeting the principal and interest of its public debt. Costa Rica has an army of 1,000 men (infantry and artillery) besides 5,000 militia; though on a war-footing the republic can command about 150,000 militia. The state also has one gunboat and one torpedo-boat. In 1909 the value of its exports was $8,176,257; while its imports amounted to $6,109,938. There are 75 post-offices. The railways extend about 300 miles. The bulk of the trade is with the United States, the latter supplying Costa Rica with bread-stuffs and ironwork. The state-church is Roman Catholic. The capital is San José (population, 26,682). The other chief towns are Cartago, Alajuela, Limon, Pun-tarenas and Heredia. Population, 351,176 and about 3,500 aborigines.

"The new student's reference work for teachers, students and families",p.463. 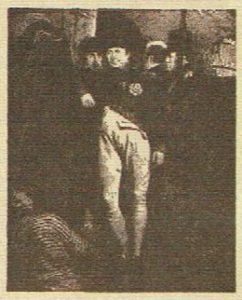